Synergy Global Housing strengthens its commitment to Ireland and the entire EMEA region with the addition of Godfrey. 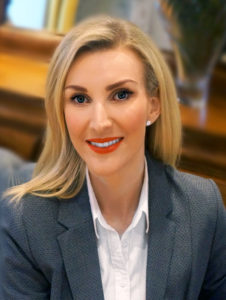 In his paper “A Theory of Human Motivation” Abraham Maslow explains that the most basic level of human survival is based on simple physiological needs such as air, water, food, sleep and shelter. It’s that last category of necessities (shelter) that drew Edel Godfrey into a career in the housing industry – where she was recently named Synergy’s Business Development Manager for the organization’s EMEA Global Solutions Centre in Dublin.

“I think the appeal in housing for me is that it’s a need,” Edel says. “It’s a fundamental need for everyone. Everybody needs somewhere to live. Housing in Ireland means stability. When you have your own home you can build your own future.”

Edel first began her career in housing in 2004, while Dublin was in the middle of a real estate boom. The volume and pace of the industry, combined with the ability to help families find a house, created a passion for real estate and property management that eventually led her to starting her own real estate agency in Dublin.

“I set up my own agency with a focus on adopting a customer-centric approach,” Edel says. “I have always enjoyed the excitement that comes with establishing new client relationships. The global property market over the past year 10 years has gone through extreme changes. It’s these changes which have contributed towards the enthusiasm within the industry.”

In 2016, Edel found that the responsibilities of leading a Dublin property company had become repetitive, and the organization was acquired later that year. Her desire for a new challenge is what prompted her to join the Synergy team.

Working as Synergy’s primary sales manager for Europe, the Middle East and Africa provides Edel the perfect opportunity to continue helping people find a new home while taking on challenges from a new industry – corporate housing.

“We are passionate about our commitment to resetting this hospitality ecosystem,” Synergy Co-Founding Partner Henry Luebbert says. “Our EMEA home is in Dublin, and there isn’t a better place to reset a new level of expectations.  It all starts with people, and we believe Edel is the perfect Brand Ambassador to represent Synergy.  Her experience, expertise and consultative approach is what our customers expect.”

This is an exciting time for the serviced apartment industry in Europe, she says. With so much still undecided about the details of the United Kingdom’s departure from the European Union, companies and cities are preparing for a post-Brexit EU, but must remain flexible enough to adjust to whatever decisions government officials eventually make.

“Companies aren’t putting all of their eggs in the London basket anymore,” Edel says. “There’s too much uncertainty about what could happen in the future so not build in some flexibility. The waters are still too choppy, so there’s a trend to spread out options across multiple markets until some clarity about the future is provided. London is always going to be London.”

The need to diversify an organization’s European presence until regulations are finalized is creating a growing need for serviced apartments throughout Europe. Companies looking to set up satellite offices outside of England are discovering the need for a first-rate temporary housing provider, and partnering with an organization that has a truly international reach is becoming increasingly important.

Synergy doesn’t simply provide serviced apartments, but manages complete housing programs collaboratively with its corporate clients. As a true housing consultant, Synergy breaks through the traditional approach with its boutique delivery of service on a global basis.

“Synergy is consciously making an effort to reinvest in the areas where we’re going to be needed,” Luebbert said. “Until Brexit negotiations are finalized, businesses are still trying to remain geographically flexible. We have to stay one step ahead of those needs, and having a European housing expert like Edel Godfrey on our side is going to help us accomplish that objective.”

For more information about Synergy’s serviced accommodations in Europe, the Middle East and Africa, please contact our office in Dublin at +353 1 485 1014.