Where Has Anthony Gonzalez Been This Month (And More Importantly Why)?

If you see Anthony Gonzalez on the streets of San Francisco and it seems like his head is spinning, that’s because it probably is. 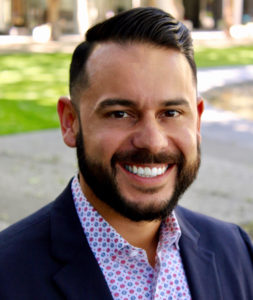 Anthony, Director of Business Development at Synergy Global Housing, just completed a whirlwind month of personal and professional travel that took him to nine countries on three continents. It started with a trip to London and Dublin to meet with clients at Synergy’s EMEA Global Solutions Centre and tour Synergy apartments in the region. Shortly after returning from Europe, Anthony got married and took his new wife, Hevanya, on a honeymoon that included stops in Bali, Thailand and Vietnam.

Three days after returning from his honeymoon, Anthony got on another international flight bound for Warsaw, Poland to attend the European Relocation Association’s (EuRA) 2017 Conference.

As part of the EuRA conference, TheMIGroup, a leading relocation management company for corporate mobility, held a Worldwide Partner Network Awards Ceremony honoring partners who have served TheMIGroup during the previous year. In addition to Synergy winning the Global Relocation Service Partner of the Year and Spirit of Partnership Awards, Anthony was presented with the Individual Excellence in Partnership from The MIGroup’s Laura Bangle and Dwayne Waldrop. The award honors an individual who represents the best in client relations through an attentive and collaborative approach and was the only award presented to an individual, rather than a company, at the event. 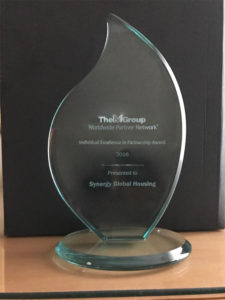 TheMIGroups Individual Excellence in Partnership Award given to Anthony Gonzalez

Returning from productive international business trips is becoming more and more common for this rockstar salesperson. Anthony, joined Synergy in July 2013 after serving as a furnished housing salesperson for a property management company. This previous role became the perfect preparation for his responsibilities at Synergy. Working for the property management company, Anthony was responsible for all aspects of the furnished apartment division. From sales to customer support, Anthony oversaw every step of a guest’s stay. This experience gave him the confidence and experience to serve Synergy’s clients with an unparalleled level of support.

“The biggest benefit for me is my level of empathy,” Anthony says. “My understanding of the industry, both internally and externally, allow me to put myself in the shoes of whoever I am working with. Internally, I understand how crucial everyone’s role is in a corporate housing program, because I’ve done every role. I can be more proactive than most because I remember issues I’ve experienced before.”

Anthony has grown into his position at Synergy over the years, and has come to represent what defines the Synergy Difference – passion for the guest. He grew up in the Mission District of San Francisco, and his knowledge of the market gives him a unique perspective for supporting his clients in The City.

This comprehensive understanding of San Francisco and corporate housing, combined with an attention to detail and passion for customer service, has allowed Anthony to succeed in every role he’s had at Synergy. Having served as a Business Development Associate in 2013, Anthony was promoted to Business Development Manager in 2014, and graduated to Director of Business Development toward the end of 2016.

“He is the true essence for what Synergy is all about,” says Mary Younger, Vice President of Sales. “We’re not selling anything, we’re supporting our clients and guests with a consultative approach to short-term housing. That’s why he’s so strong. He is a gentleman that listens and makes a client feel like they’re the only person in the room.”

Do you know Anthony Gonzalez? Congratulate him on his achievements by leaving a positive message in the comments section below!