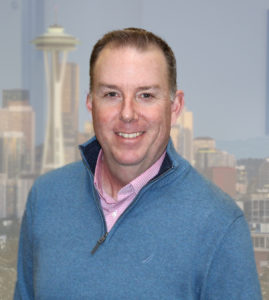 At the age of 19, Ben Wood picked up a set of golf clubs for the first time. 18 months later, he had become a scratch golfer, and shortly after his 22nd birthday, he became a professional golfer.

“It just happened,” Wood said. “It was one of those things. I kind of get obsessed about certain things I do. I worked hard, dedicated myself and it just clicked.”

That level of focused dedication will be on display moving forward as Wood was recently named the new General Manager for Synergy Global Housing’s Seattle Office.

Wood, who eventually left the professional golf world for a career in golf club management, is transitioning into corporate housing for the first time in his career. He is excited to bring his customer-centric focus to a brand new industry.

Serving as a country club General Manager required long hours overseeing a large support staff while serving as the face of customer service for organizations where member support and outreach were crucial for long-term success.

“Hospitality is hospitality, whether it’s a golf course, a restaurant or corporate housing,” Wood said. “It really intrigued me to see an industry that appears different, but at its heart, does similar things to be successful.”

Wood, a native Australian, came to North America in the mid-1990s to play golf professionally, where he competed on the Nike Tour (now Web.com Tour) and the PGA Tour Canada. After an injury sidelined his athletic career, he refocused his career on golf course management, overseeing clubs in Australia, Las Vegas and Seattle This blend of customer service, focused drive and innovative thinking made Wood the perfect fit for Synergy, a company focused on strong partnerships, left-of-center thinking and the guest experience. His experience and knowledge of Seattle will be a huge asset as Synergy continues its expansion its home base into the Pacific Northwest.

“There are a lot of little things to consider about opening a club, and it’s going to be the same with what we are doing in Seattle,” Wood said. “You have to be flexible and know when it’s time to make a decision. You make a decision that puts the customer first and the results will follow”

Seattle has become much more than coffee and computers in recent years, and Wood, who considers Seattle home, has had a front row seat to the Emerald City’s evolving corporate climate. Wood is excited to use his business acumen and help bring Synergy’s world-class corporate housing options to the Pacific Northwest.

“To me, it’s a contradiction of a city,” Wood said. “It’s very reserved, but there is so much tech and innovation going on. We talk about tech cities and whether or not the general public really engages with that industry, and I can tell you it absolutely does. I can see the growth. It’s been unbelievable. We are so excited to be part of it.”