On Thursday, October 25 Synergy celebrated the public unveiling of our new website and mobile application, as well as showed off one of our apartments at the new exclusive property Potrero Launch in San Francisco. After months of hard work, guests were able to use a host of different technology to test out all the features of the new Synergy website and smartphone application. An introductory video on the smartphone application also played on a large TV screen, and the Synergy Twitter feed was streaming on a computer.  Potrero Launch is a one-of-a-kind apartment building, which is comprised of two brick warehouses that have been converted into LEED certified apartment buildings. With breathtaking views of the city from the roof-top deck, and top-of-the-link amenities throughout the apartment, Potrero Launch is a coveted spot to live in the city. Potrero hosted their own kick-off on the rooftop of Thursday night, with music, beverages, and astounding views of the Giants stadium and the Bay Bridge. Our two launch parties corresponded nicely and flowed effortlessly into each other making the evening one of excitement, buzz, and something to rave about! 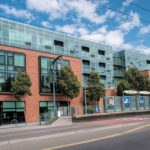